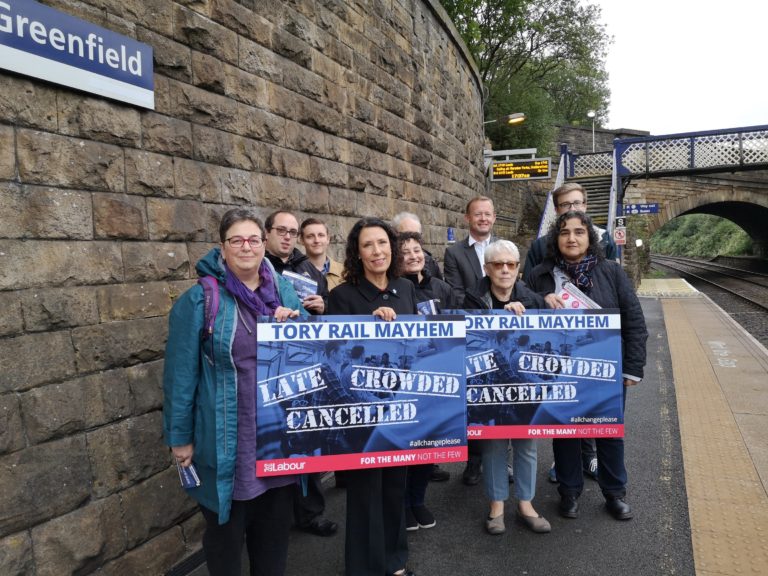 As part of my rails campaign, I was at Greenfield station yesterday to meet commuters and highlight Labour’s commitment to nationalise the country’s entire rail network.

Our railways should be run in the interests of passengers and taxpayers not for private profit.

I recently met the Transport Secretary, Chris Grayling, face-to-face as well as challenging him in Parliament, to demand that he take action over the debacle surrounding the introduction of the rail timetable affecting commuters from Greenfield station and across England as a whole.

I first contacted Mr Grayling with my concerns around the proposed timetable changes last November, but my concerns were ignored.

The poor service provided by train operators TransPennine Express and Northern Rail not just over the last few months, but for many years according to accounts of my constituents, has been unacceptable. I demanded that given their appalling record these franchises should be brought in-house and I will continue to push for this.

To add insult to injury, the chaos of the new timetabling arrangements has accompanied an increase in train fares. Labour is demanding that there should be a windfall tax on the profits of private train operating companies to fund a fares freeze next year.

As part of my rail campaign, I have called on the Government to improve rolling stock and access for people with mobility issues at Greenfield Station. Although Greenfield commuters have seen some of the rolling stock improve with the introduction of TPE services, our economy and our environment still needs affordable fares and reliable services, which the Tory Government’s policy is failing to deliver.

Labour will take our railway system back into public ownership as franchises expire, using savings to cap fares, and would upgrade and expand the rail network.