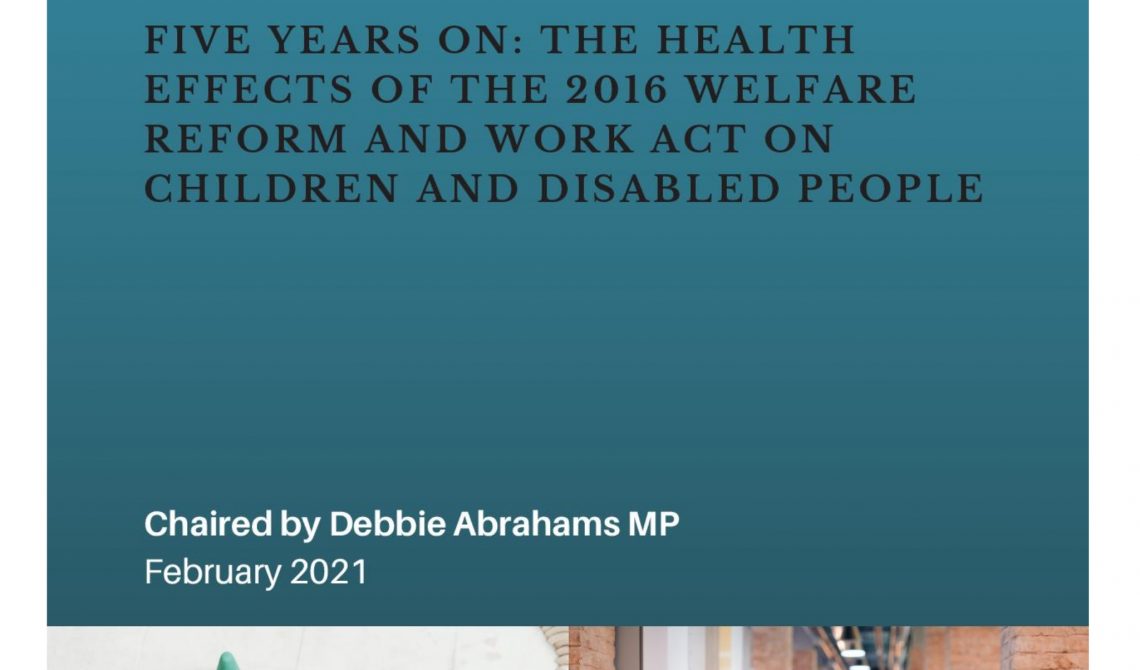 Five years on: The health effects of the 2016 Welfare Reform and Work Act on Children and Disabled People

A new report by a cross party group of MPs as part of the All Party Parliamentary Group on Health in All Policies which I Chair has concluded that, five years on, the effect of the Welfare Reform & Work Act 2016 has been ‘devastating’ to the health and wellbeing of people on low incomes.

The report which was launched today  can be read here.

This report shows there is strong evidence from several sources that the cuts in social security support have contributed to increasing poverty and financial hardship in low income households which has particularly affected the poverty levels of children and disabled people.

The analysis has found overwhelming evidence showing how the Act has pushed many low income households into poverty and financial hardship, disproportionately affecting children and disabled people. The report describes the strong evidence showing the adverse causal relationship that this poverty has had on the health and well-being of those affected, particularly children, with every 1% increase in child poverty associated with an extra 5.8 infant deaths per 100,000 and a third of the increases in infant mortality between 2014 and 2017 attributed to rising poverty.

The report also reveals how the treatment of those people reliant on social security by the Department for Work and Pensions often leaves them feeling worthless and even ‘dehumanised’.

Looking at 5 specific measures within the 2016 Welfare Reform and Work Act – the benefit cap, the benefit freeze, the two child limit, the abolition of £30 a week support for disabled people who were unfit for work (ESA WRAG) and the extension of sanctions to ‘responsible carers’ (parents of pre-nursery age children) – the APPG inquiry sought to identify the impacts of  these specific measures on household income and the impact that this may have on the behaviour and health of claimants and their families in the context of the 2012 social security cuts, and other wider ranging tax and public service changes.

In 2015 we looked at the potential impacts of the Welfare Reform and Work Bill on child poverty and health, and we wanted to compare these with the actual impacts. Again the focus was on the relationship between poverty, inequality and health, and in particular child health. (Read the APPG’s earlier report here.)

Five years on, we have conducted a follow-up review of the actual impacts of the Welfare Reform and Work Act 2016.

There is a growing evidence base of the direct and negative impacts of different aspects of the social security system on the mental and physical health of claimants and their families, in addition to the indirect impacts mediated by poverty as a result of having inadequate income from work and/or social security support.

In addition to quantitative evidence we looked at qualitative studies which pointed to a process of ‘dehumanising’ claimants that eroded their self-esteem and confidence, making them feel worthless. In some cases, the whole experience had proved too much for some claimants and they have taken their own lives.

It’s important to note the knock-on impact that this ill health will have on health services and for social protection to be recognised as mitigating against socio-economic health risk factors.

Although the Government achieved their aim of cutting welfare spending by introducing these measures – working age spending on social security has shrunk by £34bn since 2010 – there has been minimal impact on helping to get people into work who wouldn’t have got into work without these measures.”

The full report was launched with a panel of speakers to discuss the findings and recommendations of the report including:

‘Aurora’ (not her real name) – a widowed parent of two children

‘Aurora’ said: “Our situation has been greatly impacted by the changes to the benefits system. We can no longer afford the essentials to ensure even a basic standard of living. After rent and deductions are paid there is nothing left. I do not feel supported by the DWP, and I feel our group have been ignored. The pandemic highlights a desperate requirement for reform.

“We need help to participate and become productive members of society. It is our children who invariably suffer, poverty has lasting effects, they bare the consequences of these policies.”

Helen Barnard, JRF Director, said: “In the last year, millions more people have turned to social security to help them stay afloat during the pandemic. The importance of a strong social security system to act as an anchor for all of us, preventing us being swept into poverty by unexpected events, illness or job loss has never been clearer.  This APPG report demonstrates starkly the damage done to individuals, families and communities by weakening social security.

As we look forward to the easing of the public health emergency, we must learn the lessons of the pandemic and of previous recessions and ensure that social security is strengthened. There is a long way to go before the economic storm passes; the government must live up to the promise of bringing us through that storm safely, starting by keeping the £20 uplift to Universal Credit and extending it to those on legacy benefits who have been unjustly excluded from additional support so far.

Professor David Taylor-Robinson, University of Liverpool, said: “Even before covid-19, extremely disturbing trends in health were emerging in England. Growing child poverty, homelessness, and food poverty led to an unprecedented rise in infant mortality, mental health problems, and stalling life expectancy, especially for women in the poorest areas and cities. These were the same areas where 10 years of austerity measures had hit the poorest groups the hardest.

“The APPG report shows how reductions in social security for families with children have hit the most vulnerable communities. In addition larger cuts in government funding to local authorities with higher proportions of children in poverty have meant a reduction in spending on vital preventive services in areas where they were needed most.

“We know that rising child poverty has myriad adverse impacts on multiple aspects of child health and development that will have repercussions for decades to come. It is time for the government to reverse these extremely concerning trends, establishing a welfare system that protects children from poverty and material deprivation.”

Geoff Fimister, Policy Co-Chair, Disability Benefits Consortium, said: “As the economic fallout from the Covid crisis threatens to make life even tougher for disabled people, in or out of work – and as the Chancellor prepares his Budget and the Government proposes to announce details of its disability strategy later this year – this important report could hardly be more timely. It sets out clearly the impacts of austerity on disabled people and the measures needed to set a new direction and start to put things right.

The Disability Benefits Consortium is a network of more than 100 organisations concerned with achieving real social security for disabled people. We gave evidence to this inquiry – based on our research and on feedback from our members – and are very pleased to see such clear and well-founded analysis and  recommendations. We hope that the Government will take notice.”

Professor Clare Bambra of Newcastle University commented: “Our results show the importance to protecting people’s mental health of adequate social safety nets. This is particularly relevant now as the lock down and the COVID-19 pandemic is already leading to deteriorations in people’s mental health. Our research suggests that the current increase to Universal Credit of £20 per week should be maintained in order to protect the mental health of the most vulnerable in our society.”

Ellen Clifford, Disabled People Against Cuts, said: “I very much welcome the report launched today. Since 2010, extensive work has been undertaken by Disabled People’s Organisations, charities, academics and journalists to investigate, document and research the disproportionate impacts of welfare reform measures on those with the lowest incomes in society including disabled people. Interrogating and reflecting upon that wide evidence-base, the APPG has produced a stark report that succeeds in cutting through the spin and selective use of figures to present a hard-hitting portrait of Britain today. We are the sixth richest country in the world and yet infant mortality is rising and life expectancy declining. The Resolution Foundation calculated that by 2022, the total annual savings in spending for working age social security claimants from 2010 would be £34billion.

“In December 2020, the Marmot Review and analysis into the UK’s “high and unequal” Covid-19 death toll exposed key causes of this as existing poverty and inequalities driven by 10 years of austerity including social security cuts. Even after the £20 per week Universal Credit uplift, benefit claimants are receiving just 43.4% of the minimum income standard (MIS), which is the amount required for an acceptable standard of living. For those still on legacy benefits who have never been granted an uplift, their incomes are just 33.9% of the MIS. Many of these are disabled people, many have been shielding for over a year now and have seen their expenditures rise sharply as a result. The Disability Benefits Consortium recently published findings showing that 66% of disabled people on legacy benefits surveyed are having to choose between eating or heating.

“The news that the Universal credit uplift is set to continue for a further six months is welcome, but we need to urgently pressure the government into extending the uplift to legacy benefits. There is no question that the failure to do so has been detrimental to disabled people’s health and I echo the report recommendation calling for research into the long-term health effects of different social security levels to be carried out by the Department for Work and Pensions in conjunction with the Department for Health and Social Care. Ultimately what we need is a new social security system, one that provides a genuine safety net for all and that guarantees a decent standard of living. Only then will we begin to see a reversal of the regressive health and inequality trends of the past decade.”