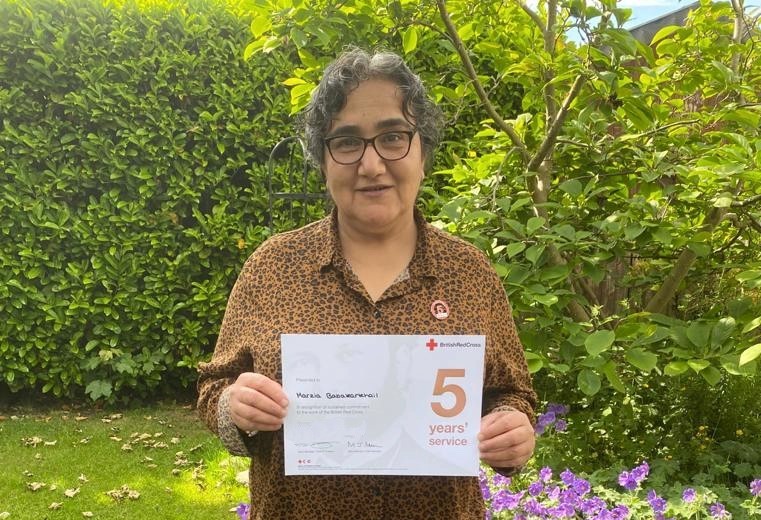 Proud Oldhamer, UK citizen, and former refugee, Marzia Babakarkhail, has been awarded a 5 year long service award by the British Red Cross for her ‘sustained commitment’ to the organisation in helping other refugees and asylum seekers.

In 2007 Marzia, who was a family court judge in Afghanistan, was left for dead after the Taliban ran her over with a car in a hit and run assassination attempt. They targeted her because she was a staunch campaigner for women’s rights.

She survived, but after six months recovering in hospital, her mother – who had continued to receive death threats against Marzia – begged her to flee the country.

Marzia went straight to the airport and took the next available flight, which was to the UK.

Because of her own experiences Marzia is keen to highlight the theme of this year’s Refugee Week (14-18th June) which is ‘we cannot walk alone’.

“I agree with the theme of Refugee Week which is that ‘we cannot walk alone’.

“I have been through this experience and felt very alone, but I was helped by many people here in the UK, so now I want to dedicate my life to helping other refugees and asylum seekers.”

Marzia now works as a part-time for Debbie Abrahams, MP for Oldham East and Saddleworth, who said: “Marzia is an amazing woman who has been through more than most people could cope with but has worked hard to learn English, become a UK citizen, and is now well known across Oldham, volunteering on a wide range of issues and helping other people who have sought asylum in the UK.

“The fact that she is such an active citizen is a fantastic reflection of all the positive support that our country has given to refugees and asylum seekers and hopefully we’ll continue to do so.”

“She is truly an inspiration to us all and Oldham is lucky to have her.”

Hannah Johnson, Marzia’s manager at the British Red Cross refugee services, said: “It has been so wonderful to have Marzia volunteering with us over the past five years. Her interpretation skills have been invaluable to our work supporting vulnerable refugees and people seeking asylum, whether at events, face to face or over the phone. Most recently she interpreted for our teams as they visited asylum accommodation in Liverpool to share information about Covid-19.

“Marzia is always helpful and professional, but above all, she is tirelessly compassionate. I’m so thankful to her for all her work.”