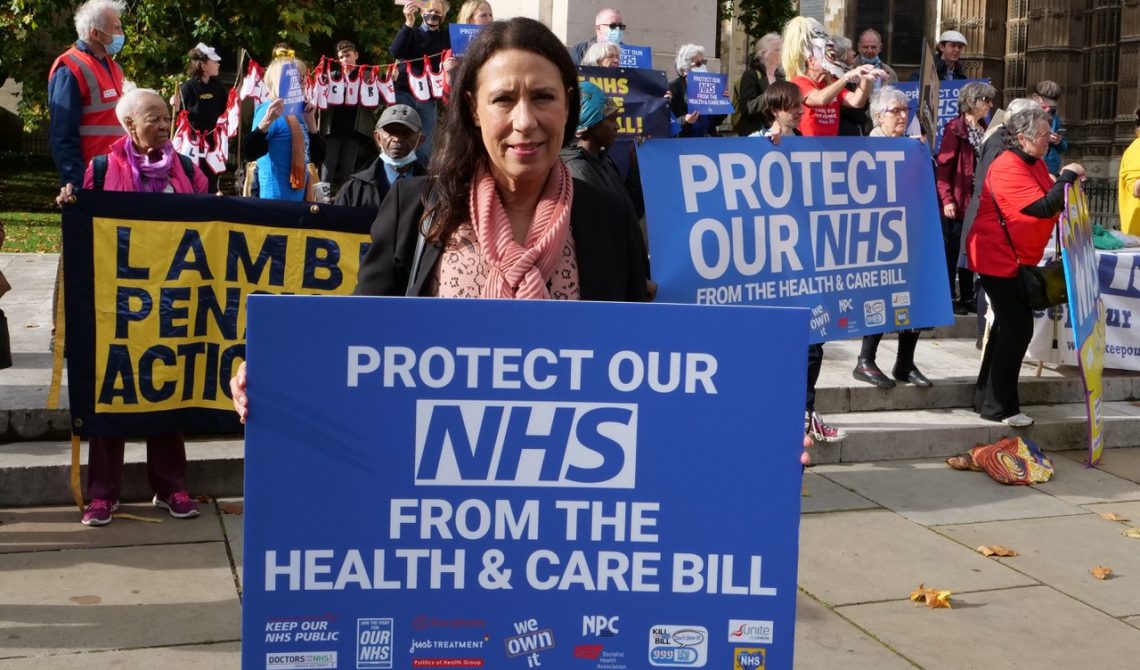 Debbie speaks out against the Health & Care Bill

I have spoken out against the Government’s plans to pass a new bill to reorganise the NHS in England.

As a long-time campaigner against NHS privatisation, previously resigning as Chair of Rochdale Primary Care Trust over concerns of the increase in use of private healthcare companies in the NHS, I am speaking out this time against the Government’s Health and Care Bill.

The action comes as a new poll by We Own It, the campaign for public ownership of public services, shows that 8 in 10 people want the Government to fix waiting lists and ensure that people can see their GPs face-to-face as their top priority, compared to just 2 in 10 who said reorganising the NHS should be a top priority.

The Bill, which had its second reading in the House of Commons on 14 July, is expected to enter the next stage of its passage on 9 November. The Bill will divide the NHS in England into 42 areas, called Integrated Care Systems (ICSs), each with its own budget and a board to oversee the delivery of health services for the area.

To introduce a bill like this when the Covid pandemic is far from over, and staff are on their knees, shows a lack of understanding of what’s needed. I’m also concerned that this re-organisation of the NHS is being used as an opportunity to extend the involvement of UK and international private healthcare companies.

The bill is proposing that private healthcare companies can become members of integrated care boards (ICBs) potentially procuring health services from their own companies, and this is entirely unacceptable.

Campaigners and trade unionists say the Bill will allow private companies to sit on the boards that oversee the new ICSs and make decisions about how the budget is spent. They also claim that by repealing Section 75 of the 2012 Health and Social Care Act, which required that all contracts be put through a competitive tendering process, the Bill will open the NHS to more crony contracts.

The new poll also shows that 70% of the public, including 70% of Conservative voters and 82% of Labour voters, say they are worried that the Bill would open the NHS to contracts being given out to private companies without scrutiny. 60% of those polled say they want the Bill to be amended to make NHS Trusts and Foundation Trusts the default providers of all NHS services.

The Westminster protest was joined by more than 35 Labour, Liberal Democrat, Green and SNP Members of Parliament. Organisers say further local actions are planned to take place in more than 100 constituencies, with local people dropping off letters to their MP’s offices asking them to oppose the Health and Care bill.

The protest was organised by We Own It and Just Treatment, a patient-led group that represents the voice of patients. It was also supported by Unite the Union, the British Medical Association, the National Pensioners Convention, and more.

Johnbosco Nwogbo, Campaigns Lead for We Own It, one of the key organisations involved in the action said: “This Bill will put on steroids the government’s unlawful contracting we’ve seen during the pandemic. With the Secretary of State for Health set to receive increased powers in this bill, Sajid Javid will be enabled to simply hand out contracts to party donors and friends without any kind of scrutiny”.

He added, “It’s clear that a lot of MPs are really worried about how this bill will change our NHS and open it to being used as a profit-making venture for profit-greedy private companies within it. We just hope more of them, including Conservatives, will speak out.”

Hope Worsdale, Digital Comms and Campaign Lead from Just Treatment, said: “All the patients we work with are deeply worried about the future of our NHS, so this week we took the fight against this dangerous Bill to right outside Parliament, and it was fantastic to be joined by so many MPs. This parliamentary support shows that our campaigning is working, and that we have people in the House of Commons willing to fight for the future of our NHS. We know that the government’s plans will fail patients across the country – so now we need even more people to get involved in ramping up the pressure on their MPs to reject the bill.”