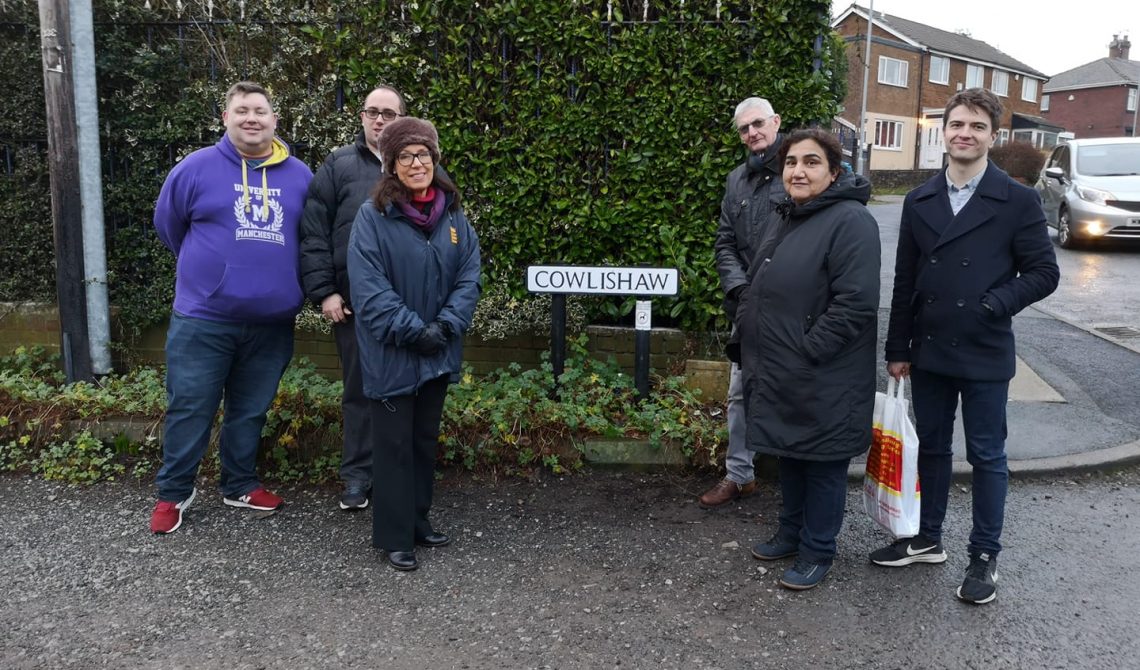 Debbie shares her submission to the draft GMSF consultation

As the Member of Parliament for Oldham East and Saddleworth, I submitted my response to the revised draft Greater Manchester Spatial Framework (GMSF) consultation on Monday. Many constituents have been in touch with me sharing their comments and expressing their concerns about this. Whilst there are improvements to the GMSF, I share some of these concerns that have been shared with me by constituents.

My submission to the draft GMSF consultation is as follows below:

I am aware that in August 2014, the Greater Manchester Combined Authority (GMCA) agreed to prepare a joint Development Plan Document, the GMSF, to set out the approach to housing and employment land across Greater Manchester for the next 20 years.

I support this sub-regional approach. It is clear that with increasing connectivity, people will continue to travel for work. Planning for the jobs of the future needs to be done at a sub-regional level to ensure all of our communities and areas benefit, as well as maximising the use of dwindling public resources. So it is entirely appropriate to consider both the housing and business needs of Oldham borough in the context of that of Greater Manchester.

I also support the principle of a strong Spatial Framework for Greater Manchester which shows ambition and confidence.

We need to be bold and see the GMSF as a key part of developing a new industrial revolution for Greater Manchester, with Oldham and the other local authorities, transformed to a new glory, taking an unprecedented place in our region’s future, where everyone can fulfil their potential and have a home and leisure space that meets their needs at every stage of their lives. We also need to ensure that our plans for our communities and our new homes over the next two decades recognise and consider the changing needs of our ageing population. Greater Manchester’s ambition to be the most dementia-friendly region in the country must also be reflected in its approach to neighbourhood and community planning.

I recognise that, disappointingly, the draft GMSF plan has been hampered by national planning policy and as such has not been able to demand that all the brownfield sites are developed first. I believe this is a major error by the Government and the Lib-Dem/Conservative Coalition before it. As part of Oldham Council’s updated Strategic Housing Land Availability Assessment (April 2018) the Council has carried out work to find more available brownfield sites which was one of my key asks from the previous plan. I am also concerned that the target for the number of homes that we need to build locally as set by the Government, doesn’t reflect our population estimates for the next 20 years, making it more difficult to just build on available brownfield land. The new draft GMSF has increased the number of homes built on brownfield to over 11,000 but that still leaves a gap of 4,000 homes to be delivered.

In my discussions with constituents about the draft GMSF, they raised concerns about green belt development.

Opposition against green belt development was done both in person and in writing with several local groups coming together to oppose the plans. Approximately 4,000 people recently took part in a protest against the impact of the increased homes on greenbelt land in Shaw, Crompton and Royton. I understand their concerns and in particular that the plans in the draft GMSF are causing such distress amongst my constituents.

The proposals for the revised draft GMSF do provide a much more balanced mix of homes including a minimum target of providing 50,000 affordable homes, 30,000 of which will be social housing across Greater Manchester. In Oldham, we have 4,000 households in housing need which show there is clearly an urgent demand for more housing in the borough. I also understand that as part of the draft GMSF proposals, there will be an intention to develop an approach to defining what ‘affordable housing’ actually means for Greater Manchester. We need to be cautious about new definitions which may prevent comparisons with other parts of the country and over time. I believe any new definitions should be in addition to current definitions.

I will continue to make the case for affordable homes, and in particular, the need for more social rented homes so we can really start to tackle our housing crisis. I was struck by the recent First Choice Homes research which showed nearly 1 in 6 Oldhamers can’t afford a social rent.

This is the key concern that the hundreds of residents that I have spoken to mentioned about the revised draft GMSF. In particular the impact on the existing infrastructure, including roads, schools and health facilities is a huge concern. The detailed policies for site allocations set out the details for infrastructure requirements and state that sites will not come forward unless it can be demonstrated this will be provided. However, there is some work to do to ensure residents concern are listened to and that they are aware of plans to ensure infrastructure can cope.

The suitability of some of the sites identified for development was also raised. For example, Beal Valley and Spinners Way were both described by residents as areas liable to flood and with inappropriate access roads.

I welcome initiatives including the new ‘opportunity pass’ for 16-18 year olds – free bus travel plus various other offers involving cultural institutions – from September, an aim that by 2040, half of all daily trips in Greater Manchester will be made by public transport, cycling and walking, a coordinated plan to bring levels of nitrogen dioxide (NO2) within legal limits is currently being developed by all 10 local authorities in Greater Manchester, working closely with GMCA and TfGM and a presumption against fracking within Greater Manchester. I will continue to put pressure on the Government to introduce the regulations needed to enable these initiatives to come to fruition.

The GMCA also need to strongly consider options such as a re-regulated bus service in Greater Manchester to ensure we provide the best integrated public transport options for residents. The allocation of employment land in Oldham needs to be part of an overarching plan to develop high skilled employment opportunities for the people of Oldham so that all our residents can thrive and succeed. I was glad to see high skilled employment is set out as a clear target in the draft GMSF plans.

Local proposals and concerns raised with me

Locally the key changes to the draft GMSF in my Oldham East & Saddleworth constituency include:

-Cowlishaw sees a reduction in the number of homes proposed from 640 suggested in 2016 to 460. Beal Valley is earmarked for 480 homes down from 900 (see earlier comments).

-There is also a cross boundary proposal between Rochdale and Oldham. Kingsway South will see 700 new homes (around 518 in Oldham) and 310,000 sq metres (around 180,000sqm in Oldham) of employment space at the established Kingsway site in Rochdale. The draft plan states development will take place in a green park setting, which will respect and take account of the existing natural environment, landscaping and topography. The proposed development would involve the loss of 119ha of Green Belt. However, a proportion of the site to the east (76ha) is proposed to be retained as Green Belt, maintaining the separation between High Crompton and Newhey.

The GMSF has earmarked three areas Shaw, Crompton and Royton all within a short radius. Many of my constituents feel the allocations selected are disproportionate and unfair. Many feel it will lead to urban sprawl between Oldham and Rochdale.  Shaw, Crompton and Royton will see its valued recreational green spaces diminished. Many residents are also concerned about how roads, air pollution levels, schools and health services (particularly GP services) will cope with the additional homes proposed in the area.

In addition, the impact on local wildlife has been raised on a number of occasions including long term consequences on wild deer and endangered species of Newt in Twingates, Shaw and other species of wildlife, including frogs, red squirrels and voles. In addition the potential loss of the natural habitats of the flora and fauna in the area have also been raised.

A new tram stop has been proposed for Cop Road to serve the new housing development for Broadbent Moss and Beal Valley as well as bus transit between Rochdale and Oldham. I have noted that funding is not yet secure for this and an investment case needs to be developed. Many residents have raised concerns whether this provision would be adequate given the number of homes proposed across this area.

-Broadbent Moss, near Sholver will see an increase of 50% more homes than in the original plan, replacing around half the amount of new employment space. Residents have raised concerns about the increased use of greenbelt to build homes and the impact on the existing road infrastructure and major pinch points such as Ripponden Road.

-50 new homes have been proposed at Spinners Way to the north east of Moorside; this site has been mooted for residential development before. Residents have raised concerns about a change in natural water course and flooding as the land as it is on a steep slope, lack of available local school places, impact on existing road infrastructure. In addition, one resident has raised that the houses are not being built on Spinners Way so the site name should be changed to Alderney Farm.

-Plans at Fletchers Mill also see revised proposals with a mix of commercial, retail, housing and tourism space. In the last plan it was earmarked just for holiday homes and ‘executive’ housing. But the new draft also sees ‘low density’ homes for families, plus affordable two and three bedroom homes which is welcome. However residents have raised concerns about how the nature of area will change and how village roads will cope. Wildlife impacts were also raised in Greenfield, with concerns for protected insect species.

For many residents the process to reach this revised draft GMSF has been an arduous one and for some there are still a number of concerns. There will never be a GMSF that pleases everyone. However, I recognise we do need to put a plan in place for our housing and employment needs otherwise, as the Government have already threatened, if they deem that the local land supply identified is insufficient, we risk it being taken out of our hands locally and the power transferred to developers.

At the heart of a future GMSF must be the people we serve – these new proposals should fully and meaningfully engage with local people, including all elected representatives.

It is important that this process is open and transparent with views sought from residents and stakeholders at all stages and the outcomes from these shared widely. This should go beyond the normal consultation process and include options such as local ballots (used in London) where residents can have a say in the design of their local area should be considered on a longer-term basis.

Currently, there is a loophole in national policy which allows developers to submit viability assessments with their planning applications, showing that the amount of affordable housing required in a local plan would reduce their profit margin. This is used to argue that they should be allowed to reduce the amount of affordable housing they build. This is unacceptable and I will continue to oppose it. We need to have stringent processes in place to reduce the risk of this happening locally.

I look will continue to monitor and engage in the development of the next iteration of the GMSF.